A Quick Summary on the Micron X100 3D XPoint SSD

A quick Summary on Micron X100 3D XPoint SSD.
THE Fastest SSD in the World!

Reminder: Micron will use the term 3D Xpoint. Intel, who owns the copyright to this term, will not use it. They use the term Optane Memory Media

Micron announced the worlds Fastest SSD, the x100 SSD. 2.5M IOPS, 9GB/Sec, 8uSec Latency. It is based on second generation 3D Xpoint. We showed the cost and density for this chip early in the year and again at FMS in 2019. And yes, we were correct in our predictions for what the chip would look like.

I bought 2 of them on Amazon last night…. JUST KIDDING!!. The product is not available to anyone yet and is supposed to sample to some select customer by the end of the year. It is apparently becoming more common to announce products that have not sampled with anyone yet. Standard qualification processes and history would indicate that the product is a year from volumes sales (More on this later).

Posted by MKW Ventures at 3:30 PM No comments:

At Flash Memory Summit, I showed why 3D XPoint was advertised as 1000x faster but ended up only 7x Faster. It has to do with the fact that individual IOPS, latency, sequential read speed may or may not be limiting factor. Actual impact is always less. The best example is based on HDD to SSD comparisons from the many benchmarking sites. SSDs are technically 500x faster than HDDs… but in most applications your apps run <2x faster....

Next week, Intel will publicly update us with info on Cascade Lake and Optane DIMMS. The above mentioned challenge will be a bit of a two edged sword for Optane DIMMS.


So we will find that in actual use, Optane DIMMS are not 50x faster than SSDs… but they are not 10x slower than DRAM either. We will see what performance actual customers see in months to come

Posted by MKW Ventures at 3:42 PM No comments: 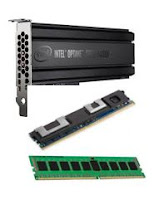 Posted by MKW Ventures at 12:06 PM No comments:

Last week I attended the Persistent Memory Summit in Santa Clara. This is a great one day conference each year bringing together experts on Persistent Memory examples, system support, and applications. The presentations are posted and there is a video as well (thank you SNIA!)


See more info on our blogs or website. Thanks to Chris Mellor of Register fame for republishing some of my FMS work on persistent memory and Optane with all the gory details and numbers.

Posted by MKW Ventures at 7:28 AM No comments:

Relative Cost and Price for Optane and other Memory

Jan 2019 UPDATED: What are the relative costs for the memory types in new SSDs and DIMMs? We have the estimates below!

This was shown about a year ago and is still a good representation of what is going on. All of the costs are lower (we publish a monthly report with details).... but the summary is still true. 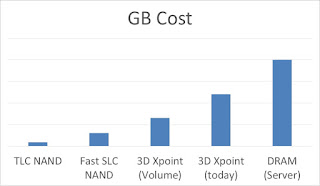 Actual values, assumptions, prices and how these will change over the next two years is available as well

We will be at persistent memory summit if you want to discuss details more. Text us to chat.

Posted by MKW Ventures at 8:38 AM No comments:

Intel announced an Optane H10 Hybrid SSD at CES last week. How might it compare to Samsung 970EVO on cost and performance?


Intel announced a Optane H10 M.2 SSD which will be in laptops sometime in Q2 or Q3. It combines Intel optane memory (the 16G or 32G cache for HDD) and a Intel QLC SSD all on one module. Optane/3D XPoint acts as a cache for the QLC SSD. By merging them together, Intel sells both NAND and 3D Xpoint and saves the PC manufacturer a M.2 slot. It is two SSDs on one board managed by Intel RST driver and custom firmware

Performance: we can expect that the Optane will perform like other Optane Memory tests. Lower latency on anything cached, slow down to SSD (QLC in this case) performance on huge serial transfers. This alone will make it a high performance SSD. Most likely faster than 970EVO on QD1 latency and speed, slightly slower than 970 on large file transfers or un-cached as QLC is slower than TLC in most applications. Power is unknown but historically, Optane is a power hungry technology

Cost is the key as always: Our data indicates H10 cost is slightly higher than 970EVO at 500GB, slightly lower than 970EVO at 1TB. See details below. Since Intel is highly motivated to sell this product to move its built up NAND and 3D XPoint inventory, they can price it aggressively... even at cost. This should make it a competitive product for PC OEMs. Not HDD cheap, and not as cheap as Intel's pure QLC NVMe SSD but a less expensive SSD with high NVMe performance.

It should be a solid competitor to 970EVO for the highest performance notebook storage. 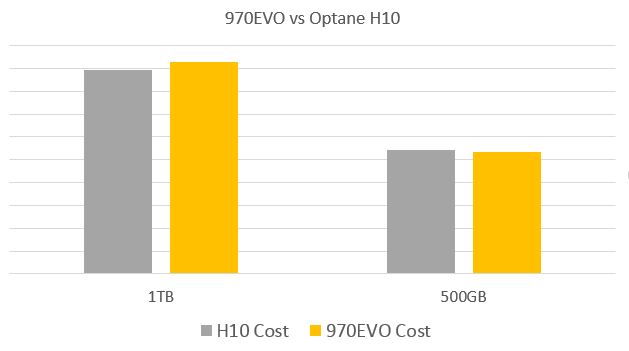 We have costs for all SSDs, NAND, and new NVM technologies along with performance numbers for Optane/3d XPoint